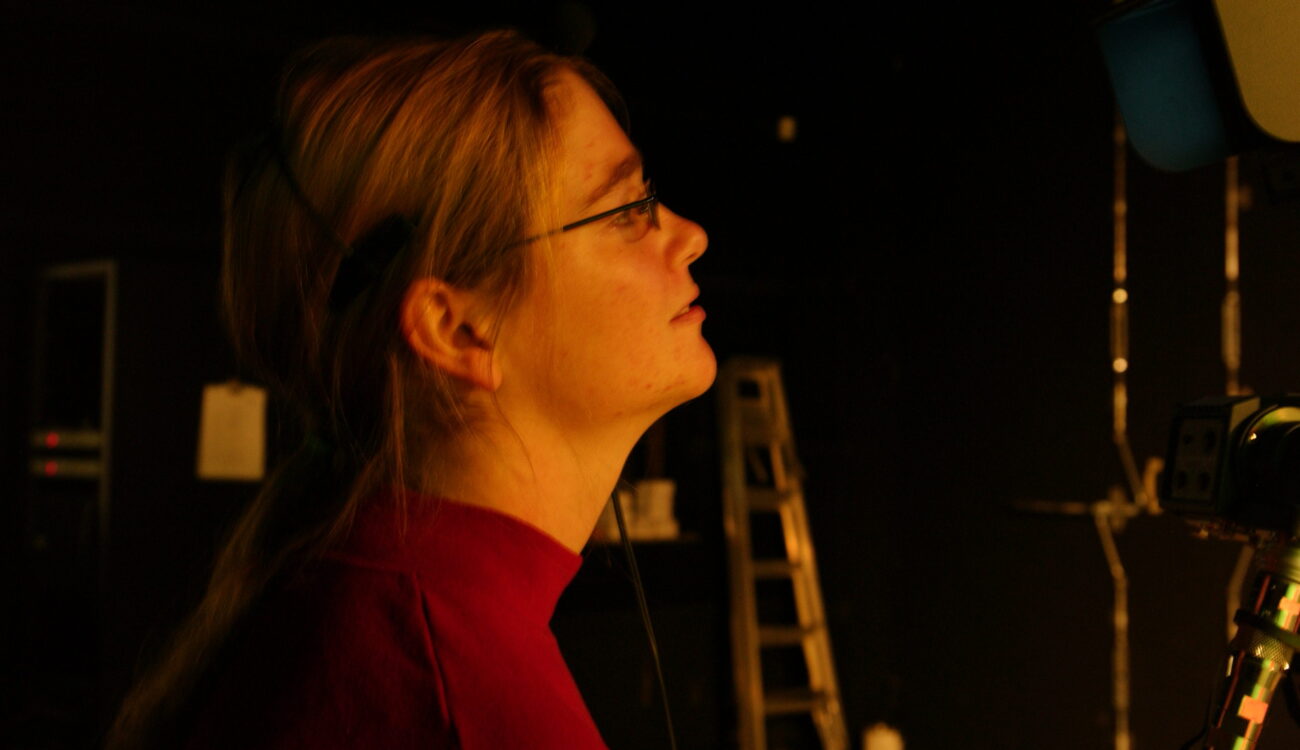 This is the story of my brief time as a filmmaker and television show producer in my late teens, early 20s at the turn of the century.

On June 28, 2001 I met my now husband Tim at the PEGASYS television studios in Enid, Oklahoma. For two years prior I had been designing the website of a local rock musician, Grey, and Tim wanted to make a television show featuring interviews and a live performance. It was Grey: The Interviews.

At the time Grey had released his first album, Colours, and was working on his second, Rock & Pop. He performed a set of songs with Jason, Mikey, and Zane. I joined Tim in the editing room for Introducing Grey and that sparked an interest in learning how to make shows for broadcast and ultimately films.

Grey invited me into the studio at Champagne Studios for his next album Rock and Pop and I filmed the recording process, crafting it into a series called Grey: The Rock & Pop Sessions. The series premiered April 8th, 2002. Episode 3 won 2nd place at the 2002 Videofest, and I was named Best Editor. The station entered the winning episode in a national public access television award contest, but it did not place. Tim and I wandered around Enid filming Grey to create two music videos for “This is the Time, This is the Place” and “All the Love in the World.” We entered these in the Bare Bones Film Festival for 2003 and took Best Student Music Video.

We filmed our experience at the film festival and aired that on PEGASYS, also importing it to public access stations around the country, and it won 2nd place in Educational programming at the 2003 Videofest later that year. I also was awarded producer of the year in 2003 and 2004. I had filmed interviews for Grey: The Rock & Pop Sessions called Grey: The Interviews which then won 1st place in Educational. I also filmed Jason Harbour and Grey playing live at Enid’s very first Fling at the Springs in 2002, creating a show called Acoustic Grey. The performance aired on October 14th, 2002 on PEGASYS.

By this time we were also importing music videos for a show called Tea & Sprockets. I would also volunteer on several live truck shoots and in studio programming for other producers filming a Red Cross Benefit Concert, Community Talk, Oklahoma Storm Basketball, A Black Man’s View, Shakespeare in the Park, and A Fling at the Springs to name a few. I regularly helped Tim film a local live gospel music showcase, The Lord’s Opry for his show American Music Coalition.

My experience at PEGASYS garnered me the necessary experience to work at KXOK, a locally owned television station. I worked there during the summer of 2002, barely 19 years old, between my freshman and sophomore semesters at Northern Oklahoma College. I filmed live newscasts, and edited commercials and television shows for the station. The most notable project I worked on was filming a 2002 Oklahoma gubernatorial debate at Oakwood Mall. KXOK was connected to the community radio station KUAL and Grey was nominated as artist of the week on August 1st, 2002 and May 21st, 2003, and given airplay and a live radio interview during which I accompanied him to the radio station.

We met Charlie Maupin and Maggie Abel at the Paseo Arts Festival in 2003. Later that year Charlie and Maggie later invited me to be the editor of their windsurfing and kiteboarding film, Liquid Wind. An intense look at the kite boarding and wind surfing phenomenon on Lake Hefner in Oklahoma City, Oklahoma. Includes musical contributions from Oklahoma artists Grey, Jon Carrube, Chris Stephens, Brad Davis, Mary Catherine Reynolds, and Louise Goldberg. Includes interviews with top Oklahoma wind surfers and kite boarders, weather experts, and those responsible for bringing this extreme water sport to Lake Hefner.

By this time I was living in Oklahoma City and attending the University of Oklahoma, having decided to major in Film. We premiered the film January 29th, 2004 at the University of Oklahoma’s Meacham Auditorium. It was accepted into the 2004 Bare Bones Film Festival and won Best Film Trailer, and won 1st Place in Sports at the 2004 PEGASYS Videofest. It also showed at Digital Independent Film Festival in Hawaii on May 1st, 2004 and the DeadCenter Film Festival in Oklahoma City on June 11th, 2004. To this day it still broadcasts occasionally on OETA, Oklahoma’s PBS station, having first aired on February 5th, 2004.

I have lots of DVDs. Just ask. Or you can check it out from the OU film student library.

After I finished editing Liquid Wind I landed a job at the University of Oklahoma’s television and radio stations as their webmaster for the next two years until receiving my B.A. in December 2005. I also worked on shows, running control room playback for the 5th Quarter sports show, operating a camera for the student newscast, and filming a live concert benefitting the station.

In 2005 we ultimately decided to make a Hebrew language film, The Hebrew Project, documenting the start of the Hebrew program at the University of Oklahoma under the leadership of Dr. Ori Kritz. I interviewed several of my fellow students and faculty on campus and was invited to film during class. We premiered it on November 29th, 2005 in the Meacham Auditorium.

It screened at the Bare Bones Documentary Fest at the Roxy Theatre in Muskogee on April 18th, 2006, and the 5th Annual SMMASH Film Festival on October 22nd and 23rd, 2005 at the Dock Theater in Excelsior, Minnesota. We also held a screening for students on 9th of November 2005 at Congregation B’nai Emunah in Tulsa. It aired on The Jewish Channel in 2009 during the High Holy Days.

Simply Dead and Other Projects

Between my semesters at NOC and OU, I was the assistant editor on a film by Ted Atchley’s Okie Rebel Films called Simply Dead. During a vacation to American Canyon in 2005 I edited an episode of Napa-Solano Post Senior Living Show. For my capstone project I made a film about organic farming and alternative medicine called The Alternative, which screened at Bare Bones in 2006. After moving to California in 2006 I was the assistant editor on Cuba: A Secret in the Caribbean by In Remote Places Productions. I returned to Enid in November 2006 to film Grey for a second show called Acoustic Grey which got an honorable mention at the 2008 Bare Bones Film Festival. I edited a music video for “Colors of the Sun” by the band Fire Zuave out of Florida which was a semi-finalist for the 2009 Babelgum Music Video Awards.

I presented the Education category awards for PEGASYS Video Fest in November 2004, served on Video Fest 2003 planning committee, and at the 2004 PEGASYS Summer Video Olympics I taught AVID Express DV to teenagers. I was one of five students from the University of Oklahoma to attend the OETA & OBEA Broadcast Seminar in October 2004, and I served as head of Music Video Judging for Bare Bones Film Festival in April 2005. I also edited a director’s reel for the filmmaker Willo Hausman in 2012.

Grey is still making music. I recorded my spoken word album at Grey’s studio in 2015. KXOK, PEGASYS, and KUAL no longer exist, but the WIRE became a real over the airwaves radio station called KXOU, and TV4OU became OUTV with a much broader reach beyond Norman. The building where PEGASYS was housed, where my husband Tim and I met, was bulldozed to make room for a downtown Enid hotel, and Champagne Studios shut down with the studio owner’s passing in 2005.

My life has a poet has somewhat mirrored my life as a filmmaker as I’m still hanging around radio stations, judging competitions, showing up in the newspapers, and winning awards. Some of my stuff is archived on Vimeo.com These days I’m more likely to be in a video performing than the one making a video of someone else on stage.

I am no longer a professional filmmaker, graphic designer, nor broadcaster due to health problems, but I had a fun run, and poetry is calling, a passion that well-predated filmmaking.